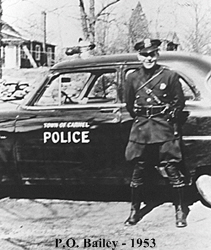 The Town of Carmel Police Department was created in 1940, after the New York State Legislature formally authorized the creation of town police departments throughout New York State.  Prior to 1940 the Town was patrolled by Constables, who were appointed by the Town Board.  In earlier days it was an elected office. In 1940 the Town of Carmel Police Department consisted of two officers, Wallace Barrett of Mahopac and Morgan Seymour Sr. of Carmel.  In 1944 Wallace Barrett was appointed as the first Police Chief of the department, and in 1945 the appointment of George Hiller of Lake Secor expanded the police department to three officers.  During this time period the town was rural in nature with numerous farms and a summer recreational area with several large hotels on the shores of Lake Mahopac.  The first officers used their personal vehicles as police cars and were considered on duty 24-hours a day.  They worked out of their houses and there was no formal police station.  The police department did not obtain an official headquarters until 1959, when space was allocated in the old Carmel Town Hall located on McAlpin Avenue which now houses the Carmel Historical Society. 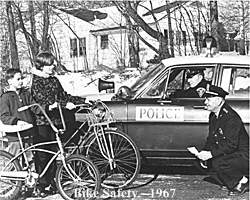 The town has undergone changes from a rural nature, to a suburban town with a population estimated at 35,000 residents.  The Town of Carmel's population boom is due mainly to it's close proximity to New York City, the city of White Plains, and the neighboring city of Danbury, Connecticut.  The Town is situated near three major highways and is serviced by a nearby Metro North train station located in Croton Falls.  The police department moved to it's present location in the ground floor of the new Carmel Town Hall in 1975. 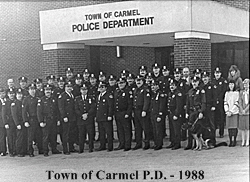