The Carmel Police Department patrols Lake Mahopac, which is an approximately  600 acre lake centered in the middle of the town.  The lake is a source of water recreation for town and area residents—allowing a wide range of water activities.  The purpose of the police department is to insure a safe environment, in which people can enjoy themselves.  Marine officers enforce local town ordinances as well as the New York State Marine and Navigation Laws.  The Marine Patrol is equipped with an 21 foot Justice patrol boat made by Boston Whaler and a 2005 Yamaha jet ski to patrol the lake.  The boat is equipped with rescue equipment, oxygen, a first aid kit as well as a automatic electronic defibrillator.  The patrol is usually assigned from Memorial Day to Labor Day, and at times several weekends in September after Memorial Day, weather permitting. 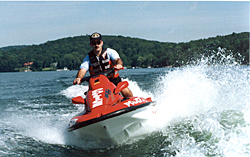 The bicycle/ATV patrol was formed in 2003 in order to enhance the department's community policing initiatives.  New York State is in the final stages of completing a bike trail through the town, which extends from the New York City line through Westchester County and which will ultimately connect to Danbury, Connecticut..  The bike patrol unit presently consists of three officers, who patrol the bike path and surrounding commercial hamlets of Carmel and Mahopac.  Their main purpose is to insure safety on the bike path and well as enforcing quality of life violations in the hamlet areas.  The bike patrol is also used at parades and other community events in which this type of patrol is more efficient. 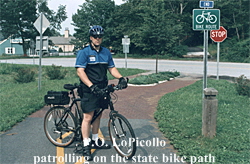 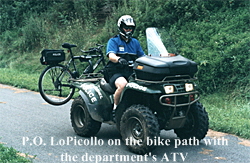 This unit is also equipped with an ATV that has been modified to carry a bicycle. It is used to patrol the bike path and is also used when the department receives complaints of ATV's being operated on private property as well as searching wooded areas for missing persons   The bike patrol is a seasonal unit that patrols from spring through autumn